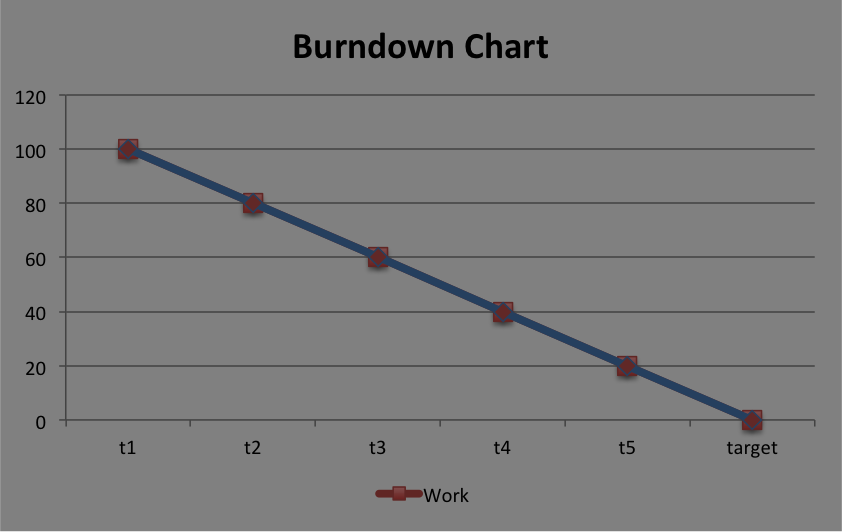 All about burndown charts!

How burndown charts are defined?

Burndown chart is a way of visually measuring a team’s progress on a daily basis to keep a project on track in order to achieve the required goal. The amount of work remaining in a project is then visible to all the team members and management. If there is any unexpected deviation from the estimated plan with respect to time or work completion, the team can respond quickly and deliver the expected product within the desired schedule.

The goal is to hit the ground by moving downwards after every iteration, starting from the position of total work to be done at the top. The amount of work left during the start of a project is the sum of all the story points (sum of points of all user requirements) and becomes 0 when it reaches the target end date of the project.

It can be plotted by using either story points or task count on the vertical axis. The most effective way of using burndown charts is plotting it by using effort remaining versus time. Firstly, teams need to break down the tasks with a limited number of hours and then, plot an ideal burndown chart that can represent the expected scenario to complete the task. Any deviation from the ideal line shows the speed of progress whether it is going slow or fast.

The use of burndown Chart in a project is intended to keep an eye on all of the simultaneous agile development methods going on within a Scrum team. For instance, if the burndown Chart shows that the team may not likely reach the sprint goal, then the team can take the necessary actions to stay on track.

Also, to make sure that time and budget for the project remain fixed and just the scope varies for duration of the project, which otherwise is difficult to maintain in the traditional methodology projects.

Strengths and Weaknesses of Burndown Charts

How can you measure it effectively?

Creating burndown charts accurately are vital within any scrum project. Teams can either create these charts manually or on task boards, or use any software tool available.

There are various ways to use burndown charts effectively. Below is the GQM (Goal-Question-Metric) approach to measure its effectiveness.

There are varied ways in which burndown charts are being used. It can be plotted at sprint level or product release level. These show the progress of a team in a single line that is very easy to understand and does not require any detailed explanation.

However, it can be misleading if not plotted properly and these charts can display incorrect information. So, it is imperative that these should be read and understood clearly and correctly before important decisions are taken for any project.

References for this article are: www.scrumalliance.org,www.agilenutshell.com.